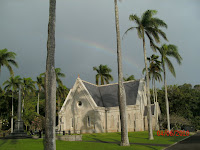 The Caledonian Society of Hawaii presented their yearly sunset Tribute to Princess Victoria Ka'iulani Kawekiu i Lunalilo Kalaninuiahilapalapa Cleghorn at Mauna ‘Ala, the Royal Mausoleum of Hawaii, in Honolulu. Mahalo to William (Bill) John Kaihe‘ekai Mai‘oho, curator and kahu of Mauna 'Ala for hosting the gathering. Kamehameha the Great chose Bill's family to take care of the iwi of the royal family. The Royal Mausoleum which was originated by Kamehameha IV and his wife, Queen Emma, is the most sacred burial ground on the island of Oahu. For more than twenty years, the event has honored the Kalakaua's musical dynasty and Ka'iulani's dual cultural heritage. Princess Ka'iulani was half Hawaiian (her mother being Princess, Miriam Likelike) and half Scottish (her father was Scotsman, Archibald Cleghorn, last Royal Governor of O'ahu). 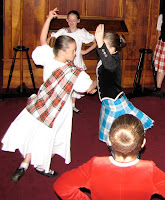 Fine Scottish weather of light rain combined with Hawaiian sunset made for a rainbow over the chapel while Hardy Spoehr, of the Celtic Pipes and Drums of Hawai`i, piped the gathering into the small church. The Royal Scottish Country Dance Society of Hawaii performed a special dance composed by Caledonian Society Chieftain, Bruce McEwan, 'The Pikake Lei', in the chapel entrance hall. Then young visiting Highland dancers, from the The Margaret Rose School of Dance of Helensborough, Scotland, performed the Seann Triubhas (pronounced shawn-troos), Gaelic for "unwanted trousers". The dance depicts the 'throwing off of the trousers', and celebrates the repeal of the Proscription Act, the law which forbade the Scots from wearing their traditional kilts, speaking their native language and from playing their bagpipes. The act was mirrored in Hawaii when it was forbidden for the Hawaiians to perform the hula. The dance honored King Kalakaua, who was responsible for bringing back the hula to Hawaii. 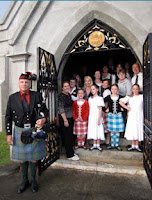 Bruce McEwan hosted the evening, which, this year, combined with National Tartan Day. After the chief's welcome, Mrs. Bruce recited Robert Louis Stevenson's famous poem, then featured speaker, Jennifer Fahrni of the Princess Ka'iulani Project spoke passionately about the Princess' life and achievements. The evening closed with a presentation of a lei at the crypt where the Hawaiian-Scottish crown princess and her family lie at rest. An excerpt from Jennifer Fahrni's talk - "Just at the time Ka'iulani came into her own, she was faced with the challenge of her life. In her nation's darkest hour, Ka'iulani found the strength to speak for her people. Ka'iulani had become empowered by fully embracing her Scottish and Hawaiian ancestries, and found comfort in understanding her dual heritage. Ka'iulani discovered that our similarities are far greater than our differences and became one of the first to start 'building the bridges'."
Posted by Ka'iulani Project at 5:52 PM