The 28th Annual Hawaiian Scottish Festival and Games is now less than a week away. It hosts The Ka'iulani Project on the weekend of April 4th and 5th in Waikiki. 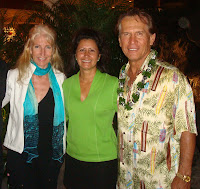 Hawaiian actor and long time host of The Merrie Monarch Festival, Kimo Kaho'ano will represent David Kalakaua, with Leilani Kupahu-Marino representing Princess Ka'iulani and Brian Dinsmore as her father, Archibald Cleghorn in The Ka'iulani Project Presentation with Jennifer Fahrni, opening the Festival in Queen Kapi'olani Park.
Hawaiian and Scottish solo pipers, Jake Kaio and Hamish Burgess will mark the beginning of The Ka'iulani Project presentation with a bagpipe salute. Having the presentation in Queen Kapi'olani Park is very appropriate as Ka'iulani's father Archibald Cleghorn was lead landscaper for the park and became known as Hawaii's 'Father of Parks'. Above photos: Jennifer Fahrni, Leilani Kupahu-Marino and Kimo Kaho'ano. Below: Princess Kaiulani Project presenters with Maui Bagpiper, Hamish Burgess and Oahu piper Jake Kaio. 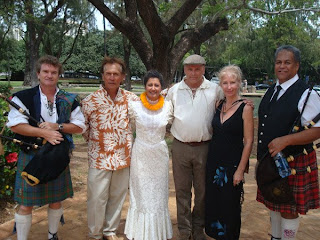 The Ka'iulani Project Oahu presentation, which includes a history of Princess Ka'iulani Cleghorn's untold heroism, and short segments from the original script, "Ka'iulani - The Island Rose" written by Fahrni and Carol Harvie-Yamaguchi, opens the festival on the large stage at 11:30am on Saturday April 4th. It will be followed immediately by the Parade and Opening Ceremony. This new play challenges us to examine the prejudices and misunderstandings that tear us apart, and her story compels us to embrace diversity as the foundation upon which we build our greatness. Producers are already seeking kumu hula and scouting actors to fill the roles of the great musical Kalakaua family and perhaps, most importantly, the lead role of Ka'iulani for the large scale production to premiere in Hawaii. Photo above right: Hawaiian piper, Jacob Kaio and Scottish piper, Hamish Burgess at Mauna 'Ala, Nuuanu.
For details of the event go to The Kaiulani Project Events Page.
Posted by Ka'iulani Project at 8:13 PM No comments:

Email ThisBlogThis!Share to TwitterShare to FacebookShare to Pinterest
Labels: Hawaiian/Scottish Festival, Jacob Kaio, Kimo Kahoano, Princess Ka'iulani
Mindi Reid contacted me about Kumu Mapuana and Kihei de Silva. She told me that Kihei wrote an utterly brilliant piece about a hula in Ka'iulani's honor (I Mauna Lahilahi)..."Those Darned Traditionalists". It's an essay all should read, as it bears on a little talked about time in Ka'iulani's life, presenting her in a truly Hawaiian context. For those who join Mindi and I on this journey, here's the link: http://hccp.ksbe.edu/kaleinamanu/5-traditionalists.php
I hope to contact them for their input to the production.
Posted by Ka'iulani Project at 8:00 PM No comments:

Tribute to Princess Ka'iulani at the Royal Mausoleum, Nuuanu 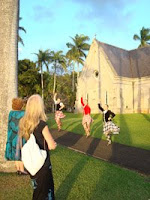 On Thursday April 2nd, 2009 - Annual Tribute to Princess Ka'iulani at the Royal Mausoleum in Nuuanu Valley, Oahu. Organized by The Caledonian Society of Hawaii. I've been invited to speak about Ka'iulani at the memorial in the church of The Royal Mausoleum, which was originated by Kamehameha IV and his wife, Queen Emma. This is the most sacred burial ground on the island of Oahu. As well as for Ka'iulani and her immediate family, the site serves as the resting place for King Kamehameha II through V, King Kalakaua, and Queen Liliuokalani. Photo above: Scottish dancers honor Ka'iulani at last year's tribute.
Princess Ka'iulani was heir to the throne of the Kingdom of Hawaii at the time of the illegal overthrow of the monarchy. Princess Ka'iulani (October 16, 1875 – March 6, 1899) was half Hawaiian (her mother being Princess, Miriam Likelike) and half Scottish (her father was entrepreneur, Archibald Cleghorn, last Royal Governor of Oahu). Champion Hawaiian bagpiper Jacob Kaio plays the pipes for the Ka'iulani Memorial every year. Hamish Burgess of Maui Celtic will also be there.
Posted by Ka'iulani Project at 2:46 PM No comments:

This is a note I recently received this important letter from Mindi Reid about much needed aid for a school in Ka'iulani's name:
Aloha e Jennifer, I wanted to mention something to all of you involved in the Ka'iulani Project... something I think is important, as we serve to honor all those who have dedicated themselves to perpetuating Ka'iulani's story: there really should be some serious attention paid to the plight of the school named for the Princess... Princess Victoria Ka'iulani Elementary School, in Honolulu.
The school, while being amongst the most impoverished and struggling, is home to the only known portrait from the life of the Princess, and continues to honor her legacy in many unique ways. (There are also many other wonderful paintings and artistic representations of Ka'iulani at the school, including a large outdoor mural, and an amazing tiled wall which includes a poem about the Princess which brings tears to the eyes...; it was written by sixth graders back in the 1970s, which makes its sophistication all the more remarkable.)
But the school needs help, particularly in these hard times. The school was already under construction in 1898, so the Princess may have known of it - although she wouldn't know that it would be named in her honor a month after her passing. Archibald Cleghorn gave the life portrait of the Princess to Ka'iulani School himself before he died.
The present principal, Thomas Moon, is a wonderful man and I have had a number of conversations with him: he has such a heart for the heritage of the school, but it is an unbelievably difficult task to meet all its many needs, particularly with the ever-changing demographics and severe poverty of most of its keiki haumana.

I believe the Ka'iulani Project can be a truly great force for good as it grows and develops... and it will reach out to the community in new and unexpected ways. Drawing attention to and honoring Ka'iulani's namesake school should certainly be part of that process.
In friendship always, Mindi
Posted by Ka'iulani Project at 8:15 PM No comments:

The Ka'iulani Project has been asked to the 28th Annual Hawaiian/Scottish Festival and Games in Honolulu on the weekend of April 4th and 5th in Waikiki. 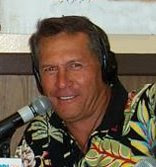 Hawaiian actor and long time host of The Merrie Monarch Festival, Kimo Kaho'ano will represent David Kalakaua, with Leilani Kupahu-Marino representing Princess Ka'iulani Cleghorn in The Ka'iulani Project Presentation with Jennifer Fahrni, at the Festival, which takes place in Queen 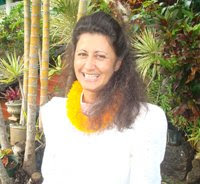 Kapi'olani Park.
Hawaiian and Scottish solo pipers, Jake Kaio and Hamish Burgess will mark the beginning of The Ka'iulani Project presentation with a bagpipe salute. Having the presentation in Queen Kapi'olani Park is appropriate as Ka'iulani's father Archibald Cleghorn was lead landscaper for the park and became known as Hawaii's 'Father of Parks'. Above photos: Kimo Kahoano on air, Leilani Kupaho-Marino as Ka'iulani. 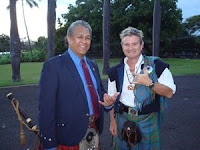 The Ka'iulani Project presentation, which includes a history of Princess Ka'iulani Cleghorn's untold heroism, and short segments from the original script, "Ka'iulani - The Island Rose" written by Fahrni and Harvie-Yamaguchi, opens the festival on the large stage Saturday April 4th, and will be followed immediately by the Parade and Opening Ceremony. The play will be produced as a large-scale stage production which will premiere in Hawaii. We're already scouting actors to fill the roles of the great musical Kalakaua family. photo: Hawaiian piper, Jacob Kaio and Scottish piper, Hamish Burgess in Nuuanu.
Posted by Ka'iulani Project at 6:50 PM 2 comments:

When producing any project, but certainly a project like this, there are highs and lows. Last night was a low. There will be another delay in the production because of a lack of funding. The times of the day with financial ruin all around us, must push us forward. Instead of giving up, we must become even more creative. We will continue to tell her story.
Posted by Ka'iulani Project at 7:39 PM 1 comment:

Kristin Zambucka and the Bronze plaque 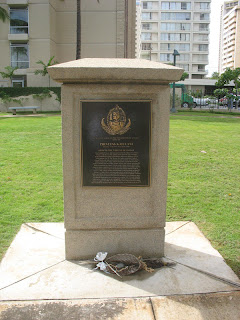 For anyone who is interested in Ka'iulani, one of the first books you should pick up is Princess Ka'iulani of Hawai'i, The Monarchy's Last Hope, written by Kristin Zambucka. Today Kristin sent me a lovely email in support of the Project and mentioned the bronze plaque she designed and had erected on the spot of Ainahau (Ka'iulani's
home) in Waikiki.
A state funded building for low rental apartments was to be built on the site of Ka'iulani's family home, but when Kristin pointed out to the developers that there should be some marker
for this special spot, they donated a concrete stand for the plaque, and a small park to surround it on the Ala Wai. Kristin checked out old maps of the day to verify her suspicions that this construction site was also the site of the home of Princess Ka'iulani and her family. 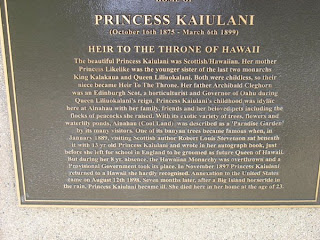 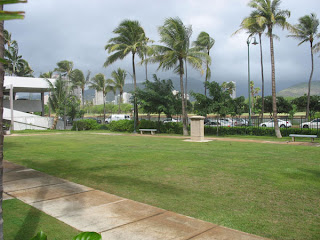 Until she pointed out the importance of this spot to the developers, it was intended to be a parking lot. Thanks to the cooperation of the developers, the plaque now stands as closely as possible to the spot where the house stood - and as for the State owned building, which was to be named Tusitala Vista after Robert Louis Stevenson, it is now called Ainahau Vista.
Isn't it good to know that some developers are willing to rethink their plans for issues like these? Warm aloha to you as well Kristin, and congratulations for saving this important location. Mahalo to Mark E. McKenzie of Abilene, Texas who sent in the photos.
Posted by Ka'iulani Project at 5:40 PM 8 comments: