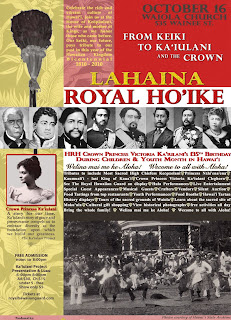 There will be fun for the entire family with The Royal Hawaiian Guard on parade, cultural and craft vendors, food booths, activities, musical performers, Scottish bagpipes, special guest appearances, silent auction and evening luau.
On October 16, 2010, experience Lahaina's Royal Past and the rich and vibrant culture of Hawai'i by joining us at the House of Keōpūolani, the wife and mother of Kings, as we honor those who came before. The keiki, our future, pays tribute to our past during Children & Youth Month in Hawaii. The Board of Directors of Waiola Church host the event on their historical and sacred grounds where schools and Hula Halaus are invited to perform hula presentations honoring, High Chiefess Keōpūolani Princess Nāhiʻenaʻena and King Kaumuali'i all of whom are entombed there, as well as Princess Ka'iulani who now lies at the Royal Mausoleum in Oahu. In these days of cutbacks to our keiki, we hope to inspire our young with knowledge of our past. We invite Schools and Youth organizations to take an active part in the Ho’ike, while also having the opportunity to learn other aspect of the Hawaiian culture. 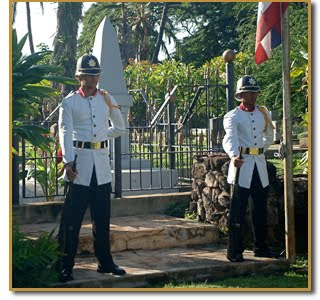 The Royal Hawaiian Guard is a new Maui organization which understands the value of our youth. They have set out to preserve Hawaii's history while also inspiring future community leaders. The culture of The Guard is built on five human truths while incorporating the Aloha & Warrior spirits. The Guard’s several programs include “The Queen’s Own”, which emulates the 1885 Queen's Own that served during the reign of His Majesty King Kalakaua. Their Unit Patron is Sacred High Chiefess Keōpūolani, the wife and mother of Kings. The Queen's Own is the first Honor Unit to stand sentry over a Royal Tomb since the overthrow of the Hawaiian Monarchy. 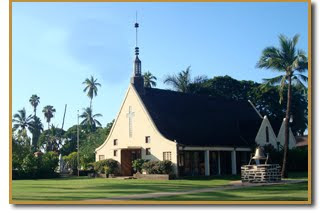 Waiola Church, which was established in the early 1800's during the reign of King Kamehameha the Great is the site for the Lahaina Royal Ho'ike. It was dedicated in 1823 as 'Waine'e Church' and was instrumental in the introduction and growth of the Christian religion on the island of Maui and in what was soon to be the state of Hawai'i. Chiefess Keōpūolani wife of Kamehameha the Great, was the most powerful ali'i in the islands at the time, and had great influence on the people. She and Kamehameha had twelve kids together, two growing up to become Kamehameha II and III. Keōpūolani was granted her request to be buried in a royal tomb, and still lays in Waiola Cemetary with her daughter, Princess Nahi'ena'ena, as she has for the past century and a half. After Lahaina became the Capital of Hawai'i and the rulers spent time on Maui, Waiola Church was established and remains the perfect spot to celebrate Lahaina's Royal Past. 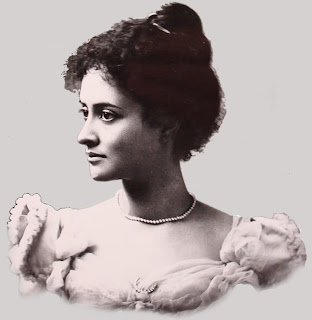 The Ka'iulani Project Presentation and Luau begins at 6:00 - 8pm in a traditional evening luau setting where we will celebrate Hawaii's Crown Princess Ka'iulani’s 135th birthday. The story of Princess Ka‘iulani Cleghorn will be told with readings of selected scenes from the original upcoming production “Ka’iulani - The Island Rose”, projected historical photographs, music and hula. Princess Ka'iulani of Hawaii is an inspiration for young people of all cultures today to stand up and speak for their beliefs, and to find their truths by fully embracing their heritage. Ka‘iulani's story of grace and determination is a story for our time. We celebrate the friendship between Ka'iulani's Scottish and Hawaiian roots. Ka'iulani discovered that our similarities are far greater than our differences and became one of the first to start 'building the bridges'.
See photos and read further details about The Lahaina Royal Ho'ike.
Posted by Ka'iulani Project at 1:02 PM 1 comment: