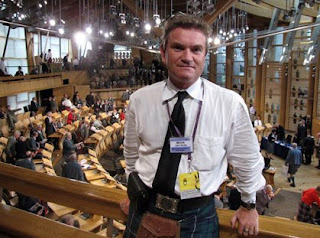 Hamish Burgess Represents The Princess Ka'iulani Project at "The Gathering"
LAHAINA NEWS - MAUI - Aug. 20 2009
Scottish Ambassador to The Ka'iulani Project and owner of the local business and cultural organization Maui Celtic, Hamish Burgess recently represented Hawaii Scots at "The Gathering" in Edinburgh, Scotland. The event was the centerpiece of Homecoming Scotland 2009, a year long series of events aimed at bringing folks of Scottish heritage back to their homeland. As Scottish Ambassador for The Princess Ka'iulani Project, Burgess took the story of Hawaii's most beloved Hawaiian/Scot, Victoria Ka'iulani Kalaninuiahilapalapa Kawekiu I Lunalilo Cleghorn, Crown Princess of Hawaii, back to her father's homeland. Burgess was a featured guest on Liz Clark's show "Travels with your Aunti," on Celtic Music Radio Scotland and broadcasting icon Archie Fisher's "Travelling Folk" show on BBC Radio Scotland, both in Glasgow. Photo: Hamish Burgess at Clan Convention in Scottish Parliament. Read full article...
Posted by Ka'iulani Project at 1:11 AM No comments:

As Scottish Ambassador for The Princess Ka’iulani Project, Hamish Burgess took the story of Hawaii’s most beloved Hawaii/Scot, Princess Victoria Ka'iulani Cleghorn back to her father’s (Archibald Scot Cleghorn) homeland. Hamish was asked to speak about the Princess and the Hawaii/Scotland connection when he was a featured guest on both Liz Clark’s show “Travels with your Auntie” on Celtic Music Radio Scotland, and on Archie Fisher’s Traveling Folk on BBC Scotland, both in Glasgow. To hear BBC Scotland show, go to Link and click "listen now' - available until August 6th, 2009. For Hamish's segment go 37 minutes into the show.
Posted by Ka'iulani Project at 8:41 PM 1 comment: