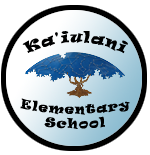 Princess Victoria Ka'iulani Elementary School, in Honolulu, which was built in the last year of her life, has been honoring the Princess for over 100 years. In 1999, the school celebrated it's 'Centennial'. Students regularly take part in the Princess Ka'iulani Hula Festival each year in Waikiki. As well as housing a life portrait of Ka'iulani, which was given to the school by Ka'iulani's father, Archibald Cleghorn, the students have been honoring their Princess in their own ways. Mindi Reid, who recently visited the school said, "There are many other wonderful paintings and artistic representations of Ka'iulani at the school, including a large outdoor mural, and an amazing tiled wall which includes a poem about the Princess which brings tears to the eyes...; it was written by sixth graders back in the 1970s, which makes its sophistication all the more remarkable."
Despite impoverished circumstances and the most challenging demographics, Princess Victoria Ka'iulani Elementary School has accomplished great things. This award-winning school is deserving of greater aid from the community.
Posted by Ka'iulani Project at 9:51 PM